Times are demanding adjustments of us all. I felt this month’s letter would be a good opportunity to do something I’ve had in mind for a while: walk through some passages God used to help us make those adjustments.

“He who calls you is faithful; he will surely do it.” (1 Th. 5:24) This principle has been so helpful! It may seem as if you’re making those adjustments, you’re exercising faith and taking action. In reality, God is the One doing it in you. It doesn’t always make it “easier,” but it builds my faith and helps overcome my own excuses or reluctance.

"Thus the LORD used to speak to Moses face to face, as a man speaks to his friend. When Moses turned again into the camp, his assistant Joshua the son of Nun, a young man, would not depart from the tent." (Exodus 33:11) Moses stands out here as the individual with greater rank and responsibility. The words even signal a closer type of relationship with God. I personally love the note about Joshua, though: it’s as if God Himself delighted in Joshua’s desire for Him. In ministry, just as in other walks of life, those of lower seniority carry out ideas they’d never have chosen and must live with the outcome. I don’t believe God’s sovereignty can be reduced to, “that which occurred was the will of God” but I do believe God’s desire is for each of us personally to seek Him earnestly, and that He cares most about that aspect of our lives.

“Then Moses said to the people of Israel, ‘See, the LORD has called by name Bezalel the son of Uri, son of Hur, of the tribe of Judah; and he has filled him with the Spirit of God, with skill, with intelligence, with knowledge, and with all craftsmanship’” (Exodus 35:30–31). This was a very early passage that became meaningful to me as the first example of a Spirit-filled man in Scripture, and it was manifested in effectiveness in a broad way through his professional craft.

“If anyone says to you, ‘Why are you doing this?’ say, ‘The Lord has need of it and will send it back here immediately.’” (Mk. 11:3) It’s instant availability that makes me useful to God. To fulfill a specific prophecy, Jesus “needed” a humble donkey and used the one that was made available to Him.

”For it is written in the Law of Moses, ‘You shall not muzzle an ox when it treads out the grain.” Is it for oxen that God is concerned?” (1 Corinthians 9:9) To continue the spirit of comparing myself to an animal not especially known for being bright, this passage was God’s way of reminding me that He has ordained that His mission carries with it the call to support that work. It was hard for us to come to terms with the idea of raising our own support—it seemed impossible. But God has been more than faithful to us over the past 16 years.

“He who supplies seed to the sower and bread for food will supply and multiply your seed for sowing and increase the harvest of your righteousness. You will be enriched in every way to be generous in every way, which through us will produce thanksgiving to God.” (2 Cor. 9:10–12) Amidst a harvest of spiritual multiplication, here again is that principle of knowing Him better through His work. It’s a call to our ministry team as well as to ourselves, a promise to the sower and to the one through whom God supplies! We’ve seen so many join our support team in an experimental way, only to find this promise true!

“And a vision appeared to Paul in the night: a man of Macedonia was standing there, urging him and saying, ‘Come over to Macedonia and help us.’” (Acts 16:9) It was only a short time after I joined the ministry when I began to see that the contacts mostly don’t see what they need. Scripture's Macedonian Call is interpreted through the lens of Paul’s decision to go there for mission work. The man in the dream only said, “Come help us!” And that’s what lost people want - help. Sometimes that cry comes out, “I just tested HIV positive” or “how can I forgive my husband’s unfaithfulness and love him again?” or even “You Christians are such hypocrites!” In order to have the best chance of responding in a way that they’ll give their life to Christ, I always have to ask for His enlightenment and words.

“…for a wide door for effective work has opened to me, and there are many adversaries.” (1 Cor. 16:9) As those of you who’ve been with us from the beginning know, surrender to God’s call brought opposition from surprising quarters. We’ve found that this is a very common outcome for missionaries. The enemy knows how effective a unified team can be for the gospel.

“Wake up from your drunken stupor, as is right, and do not go on sinning. For some have no knowledge of God. I say this to your shame.” (1 Cor. 15:34) This chapter is so amazing! It begins with the gospel being declared. It says Christ’s bodily resurrection is our only hope. It concludes with our rapture and union with Christ in an immortal body. In this central verse, Paul holds us responsible to people who still don’t know Christ.

“Besides this you know the time, that the hour has come for you to wake from sleep. For salvation is nearer to us now than when we first believed.” (Romans 13:11) This one is familiar to everyone who receives this letter, since it’s been in my signature for 16 years. Like the one above it, it’s a call to make the Great Commission a matter of urgent concern. We look forward to that day of victory, but it will mean all our opportunities to bring others along with us are gone!

“And the Lord said, ‘Who then is the faithful and wise manager, whom his master will set over his household, to give them their portion of food at the proper time? Blessed is that servant whom his master will find so doing when he comes. Truly, I say to you, he will set him over all his possessions.’” (Lk. 12:42–44) Several of Jesus’ parables encourage even those who thought they’d missed their chance to join Him in His work. It’s especially compelling here, showing God’s favor for those who take Him seriously. Even the reluctant, bitter, discouraged or distracted servant can recognize the signs of His coming, repent, get involved and still receive reward and honor.

“And Jesus came and said to them, ‘All authority in heaven and on earth has been given to me. Go therefore and make disciples of all nations, baptizing them in the name of the Father and of the Son and of the Holy Spirit, teaching them to observe all that I have commanded you. And behold, I am with you always, to the end of the age.’” (Matthew 28:18–20) This one is no surprise. What full-time Christian worker doesn’t meditate on the Great Commission? God’s sovereignty woven throughout all of these passages was the ultimate purpose of my decision to share them with you today. There’s no authority that isn’t Christ’s; and He’s promised to be with us! In an echo of Joshua 1:9, given to encourage Joshua to have the courage to take territory, Jesus promises He’s with us to the end as we share the gospel and train people in His commandments.

And finally, “…so that in the coming ages he might show the immeasurable riches of his grace in kindness toward us in Christ Jesus.” (Eph. 2:7) To the extent that we’re stunned at the depravity of people, we demonstrate that we aren’t seeing the world biblically. Those who hope in this world only should be getting disillusioned! Christians should be looking up with encouragement, expecting our redemption is drawing near. (Lk. 21:28) Not a single one of His good promises has ever failed! (Josh. 23:14) This passage makes me look forward to God’s exposition of our own lives—so we can see the richness of just how His promises were fulfilled.

Today, Christians are criticized for being too committed to the idea that justice can only be resolved in eternity, the authentic, consistent message of the Bible! The notion of a gradual process making this world of moth, rust and theft into the kingdom of equity, beauty and harmony described in passages like Is. 11:6-9 misses the entire point! It’s wanting the blessings of the Kingdom without the rule of the King.

Things may get worse before they get better. I know we’re literally promised great apostasy in the end times. We may see more public “defections” and find ourselves increasingly at-odds with the prevailing culture. 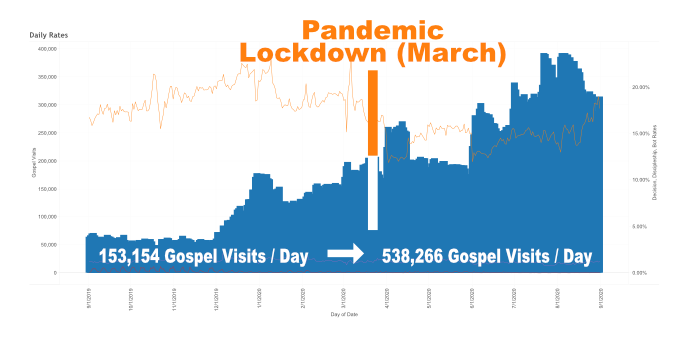 Along with apostasy, The gospel of the Kingdom will be preached in all the world! (Matt. 24:14) Global Media Outreach has seen an uptick in interest from both contacts and donors since the beginning of the pandemic. As Online Missionary Dave shared with me, he’s “looking forward to all God is up to in these very special times.” This is the kind of hopeful attitude that makes Christians healthier. It comes from having to count on God. The sad results of relying on anything else are on display all around us right now, making your light shine brighter!

Do your Christian friends need encouragement? It’s a great time to watch where God is at work, join Him, learn to know Him better, claiming His promises, experiencing His empowerment and showing His grace at work. Our lives could make an enormous difference in the life of someone else who has lost hope in this sad and broken world.

You receive this letter because you have answered God’s call. You know He is faithful and you have many reasons to give Him thanks. We want you to know we give thanks for you! So often we ask for prayer requests, but forget to ask if you’d like to share praises or answered prayers. We’d love to hear from you!

Hope breaks down the barriers

No connections by accident The wide “net” we…

…at the commandment of the LORD…

When you or I read the Bible, we have help. The very Author of Scripture …

William Carey’s 1792 publication, “An Enquiry into the Obligations of Chr…