As we look at what it’s going to take to complete the Great Commission, we have to admit to having lost ground. Areas of the world rich from the blessings of Christianity are now rejecting it. The Czech Republic was the location of an evangelical movement 100 years before the Reformation. Today unbelievers outnumber believers 3-to-1. But we really don’t have to look that far—urban areas in the USA are getting more and more secular. And the upcoming generation is the least religious ever.

Where other religions are dominant, we have to admit western missionaries have been a little tone-deaf.

A skit in one session made this clear. The presenter, playing the western missionary, offered the “Muslim,” played by another missionary, a common approach to the plan of salvation:

“Do you know God loves the world and gave His Son…” “Nope! Allah only loves His subjects. Allah has no son.” “…but it’s only through Jesus that you can have your sins forgiven…” “Nope! Man is only weak, not alienated. Allah can forgive any sin he wishes.”

Even when we do understand Islam, one presenter explained, we oversimplify Muslims. A commonly-used phrase captures this well: “these people aren’t real Muslims.” In other words, they never attend mosque or pray, they aren’t Arabs, they’ve assimilated into a non-Muslim urban center or they enshrine a talisman to which they attach spiritual power. People tend to defy pigeon-holing.

Most of the cultures we’ve been least effective in reaching see the world with a “Shame/Honor” emphasis. Many Africans see sin as sin only when the individual is caught, a missionary to the region explained, because that’s when shame comes upon him and his village.

Westerners have to admit to truncating the gospel to fit our culture, another pointed out. Even our own culture is being reshaped in a way that alienates listeners from the ways we’ve developed to tell the Old, Old Story:

The cohesive, protecting and preserving impact of Christianity is being pushed out of public life and forced to express itself only in private. This is what they call secularism. Meanwhile, discredited, contradictory ideas are being presented again as equal or even superior to the ideas that brought liberty and prosperity to more people than any others in human existence. It’s what they call pluralism. Sympathy for fragile individuals is being used as justification for the creation of social norms that bind everyone (individualism) in impractical and unjust ways. Objective interpretation of words and universal application of justice is argued away by a thousand sensational and absurd examples (relativism). And throughout it all, we see the influence of technology at times enabling effective communication and at times hindering it. As one presenter put it, every broadcast is a biascast; and we’re entertaining away our ability to concentrate hard enough to follow important ideas.

So what are we as followers of Jesus to do?

We have to love God enough to be faithful to His message and His Commission, to love our neighbor enough to figure out how to bring the liberating truth of the gospel to him full-force in a way that he can understand, with authenticity and conviction.

With all of the ideas we have to wrestle with, with all the inadequacies I feel in doing so, I am so grateful to still be in the wrestling match. The conference’s concluding presentation helped us all see our strategic position:

“Most people live their lives within a period or era of history. Only some live in a turning-point of history. We are among those few. Our time is such a time, a point of turning, a change of times, a season of crossover, a globalshift of history. When historians of the future write of these times, they will note that we were the generation that lived in a globalshift, a time of turning that shaped all that follows for a significant period of planetary history.”—Thom Wolf, International Director, University Institute, New Delhi India.

At session after session, I heard a variation of this advice: get to know them. Learn to ask good questions. Questions are powerful: even if people answer you deceptively, they can’t deceive themselves. This really was a confirmation for me, as one of our discipleship projects for the coming year is an effort to prayerfully research and profile our seekers so that we can ask better questions and better direct their growth based on their answers. 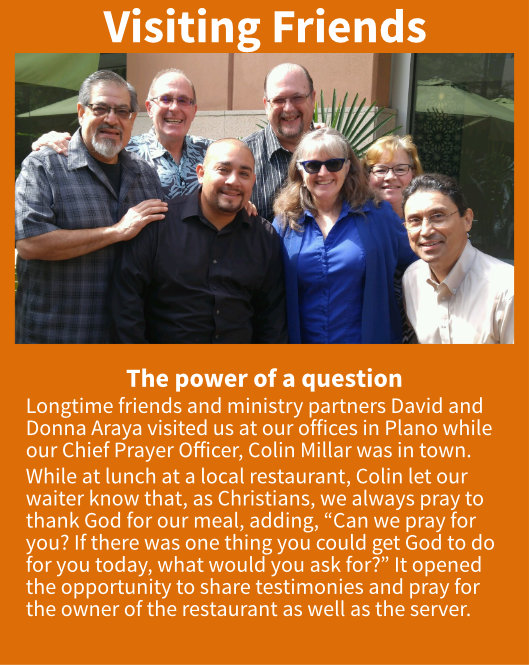 Will you pray with us about this project? We are so grateful for your partnership with us in prayer, your advocacy and your consistent financial support of our work. We couldn’t do it without you! Thank you so much!

When I arrived at Campus Crusade’s New Staff Training in 2003, I discover…

Being at this for over ten years has been quite an education. Normally, t…