Cindy and I were down to a trickle of water for 2½ days, but thankfully our electricity never went out and no pipes were broken. With Emily and Luke away at college, we moved upstairs where it was easier for the heater to keep up. Unfortunately, at college, they had it a little rougher; Luke’s dorm had a burst pipe in the lobby and the water was out for several days in Emily’s dorm.

True confessions time - we aren’t so accustomed to “roughing it.” But we recognize that it’s good for us. In my annual trip through the Bible, I’m in Numbers, a book the Jews call “in the wilderness” (בְּמִדְבַּר). The wilderness wandering included a series of complaints. They didn’t like roughing it either. They griped about their thirst, about waiting, about the manna with which God was feeding them. Egypt had been the world superpower of their day, and God wrecked them in order to redeem Israel, and still they wanted to return. Do you get annoyed at them? I do. At the same time, I recognize my own impatience with discomfort whenever I read this book. Maybe that made me that much more aware of His provision for our family.

We were keenly aware of how much worse it could've been. (10 million lost electricity and there were at least 70 deaths attributed to the storm.) Last week really just added to my list of things to be thankful for from two months ago: to our gratitude for paper products and the sweetness of unobstructed breathing, we can add thankfulness for drinkable water, heat, daily hot showers… the few things we did miss while North Texans were facing sub-zero temperatures.

You begin to see a turning point towards the end of Numbers. Chapter 33 is (a merciful) summary of the rest of the wandering. And by the time the Israelites arrived in Canaan under Joshua’s leadership, it was a very different group that conquered the land as God’s agents of judgment on the inhabitants. (Genesis 15:16)

For 40 years, they had camped or moved “at the commandment of the LORD.” This time through, I noticed something important. The command wasn’t a verbal one. (See Numbers 9:15-23) It was the presence of the cloud and fire over the Tabernacle. God simplified their lives and made them depend upon Him. He set it up in such a way that the people had to take note of what God was doing and follow Him. They had no choice, no distractions. I wonder if he’s doing the same to His people today: creating situations where we’re stripped of distractions and primed to focus on Him. What did Jesus say? “…the Son can do nothing of his own accord, but only what he sees the Father doing. For whatever the Father does, that the Son does likewise. For the Father loves the Son and shows him all that he himself is doing.” (John 5:19-20)

A lot of our Online Missionaries are here in Texas. Cindy spent last week calling to check on them. OM Jo Ann received a message from Loretta (also in Texas): “Dear God, can you help me and my family?…my mom's house is so [cold] inside the house. Lord, can you help me? She is 74 years old. It is so cold and I need help.” Jo Ann’s Community Leader had to take over the conversation with Loretta when Jo Ann herself lost electricity. Susan helped her and used the opportunity to verify whether or not Loretta was in a saving relationship with Jesus Christ, or only sought Him in times of crisis. 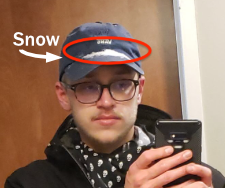 God is willing to allow us to “rough it” in order to get our eyes on what He is doing so that we can be ready to move according to His direction.

I realized that the name Uri is Hebrew. It is a shortened form of Uriel, meaning light, or fire of God. Uri was the father of Bezaleel, the craftsman of the original Tabernacle, (See Exodus 31:2), where God’s people had to look in order to see the leading fire of God in the nighttime. It’s said that the Rabbis have a saying: “coincidence is not a kosher word.”

One of the three major feasts of Israel is called “Sukkot,” the Feast of Booths or Tabernacles. It’s called the Feast of Tabernacles because they are instructed to live in a sukkah, or type of tent, for seven days in order to commemorate the wilderness wanderings. The seventh day of this feast is called the Hoshanah Rabah, the Great Hosanna. (Hosanna is a cry to God, “save us now!” See Ps. 118:25-26)

Is this time of destabilization, of disinformation and “deplatforming”, of stripping away distractions, a heart-preparation for a great new harvest? Sukkot is also known as the feast of Ingathering and is celebrated at the time of harvest!

Whatever we do, let’s not let the pandemic, the government over-reach or the lawlessness of others make us bitter. There are things to mourn: the loss of influence and freedom, and especially the loss of friends and family. (Two of our ministry partners are mourning the loss of their husbands due to the coronavirus. Would you please join us in prayer for Sylvia and Ruth?)

God may be using the threat or reality of some of these things to re-orient people toward Himself and His calling for every Christian—enduring conditions alongside the rest of the world, but with evidence of an internal empowerment that gives us a platform to urge them to seek reconciliation with God. (2 Cor. 4:7-5:20)

We want to thank you again for your faithful investment in us which makes it possible for us to share this message with our nation and our world!

What we did for winter storm Uri

Rocks or stones are a frequent image in the Bible. Think of the rock that…

Last week was interesting for Global Media Outreach in Texas. You may hav…

Sometimes this prayer letter is more of a “report” letter, a “thanks” let…