I stopped church when I started college. My beliefs didn’t change, but my practice did. What brought me back? I met Cindy in grad school and discovered she needed Jesus more than she needed me. The need to provide her a better context for her newfound faith became a gradual reawakening for me as well.

Our move together to California two years after our marriage was another lesson in culture and context: Christianity was comfortably dominant in the Southeastern U.S. in the 1990s, but not in Southern California. As a result, many of our new California Christian friends had a more vital connection to mission as followers of Jesus. They’d had to make up their minds not to be conformed to the culture—to know the truth well and look for opportunities to share it.

Our new Something Better campaign has me thinking again about those days. I’m sure all Christians who went through 9/11 look back on what sadly turned out to be a rather shallow national turning to God with regret that it wasn’t deeper and more lasting. We could never have anticipated how hostile the first two decades of the 21st century would become to the faith held by America’s founders.The shock of the September 11, 2001 attacks also played a part in awakening us to God’s call to share the gospel. In the days that followed 9/11, the churches in secular Southern California were filled—and I’ll never forget the sight of the Los Angeles city busses with “Pray for America” animating by on their digital transit information displays! Hearing President Bush’s 2002 State of the Union address was another hopeful moment. In it, he urged every American to serve goals larger than self and “commit at least two years—4,000 hours—over the rest of your lifetime to the service of your neighbors and your nation.”

How are we going to show people who are now living in a very different America, a questioning America, one filled with thousands of on-demand conveniences and distractions, that they need a relationship with God? (Today Christians in all walks of life are involved in a struggle just to maintain the freedom to mention Him in public!) We must tell them, and show them, that Jesus is better.

The writer of Hebrews was emphasizing the same theme. One way to look at one of my favorite New Testament books is that it tells followers of first-century Judaism that Jesus is better… 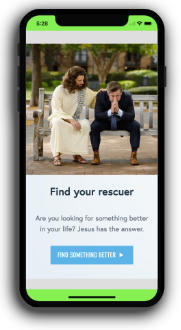 At the ultimate point in the case it presents, Hebrews 11 explains faith—and puts forth changed lives as evidence.

As much as we need to speak in terms our visitors can understand, it’s even more important that our Online Missionaries show them compelling love brought about by His work in our lives! Please pray for this effort to reach this nation to call out seekers of a better one, “that is, a heavenly one” (Hebrews 11:16).

For the past 14 years of ministry, 85-90% of our contacts have come from outside the United States. It’s fitting that we try to reach the unreached of the world. But unless something changes here at home, we may one day lose the chance to do what we do!

We are so grateful for your prayers and support that makes it possible for us to serve!

He is Risen! We hope you had a wonderful celebration of the Lord’s Resurr…